The Capitoline Hill is, together with the Palatine Hill, the site of the early settlement of the Romans. That’s why, even if it’s probably the smallest of the seven hills, it is a place where history has left a huge mark. Situated in the district called Rione Campitelli, right in the middle of the center and overlooking the Colosseum and the Roman Forum, it’s not just one of the best sightseeing spots but, as we will soon discover, an interesting and surprising destination.

When Romulus founded Rome, he built the first fortification walls between the Capitoline Hill and the Palatine Hill. Later, as the early monarchy was menaced by the surrounding towns’ armies, here is where the Roman soldiers fought their very first battles. Surely, they were not aware that their courage would have led this place to become the center of the political and business life of the greatest empire of ancient history.

This little plot of land has witnessed the meeting of kings, emperors, politicians and prominent representatives of all the cultures of the known world, up to the present age. Today, the square hosts the Palace of Senators (home of the Rome City Council), the Capitoline Museums and various buildings and artworks of interest.

At the beginning, the hill was chosen as the main settlement’s site because its steep cliffs overlooked the Tiber and the old wetlands surrounding its banks, making it hard to be reached by enemies and opponents. During the centuries, the hill has been slowly connected with the rest of the large center of Rome, including the Forum, which lies on its side. Today, to get to the top of the hill, you will have the pleasure to climb a flight of stairs designed by Michelangelo in the middle of the sixteenth century. The famous painter, sculptor and architect also took care of the larger project of the renovation of the Capitoline Hill Square. 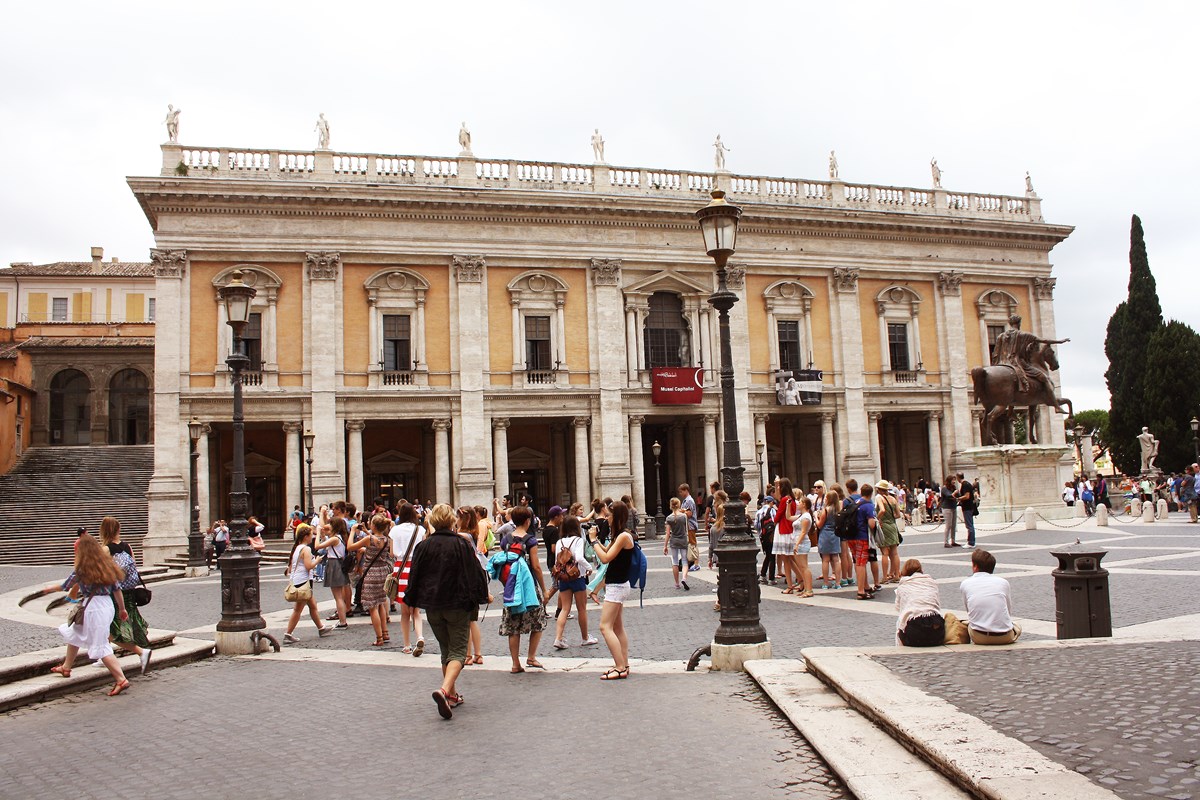 Originally, the Capitoline Hill featured various public buildings and temples. Most of those have been destroyed or covered during the Middle Ages and Renaissance, according with the new city plan invoked by the Popes. Among the old temples that once stood on the hill, along with smaller worship sites and shrines, there were the Temple of Capitoline Jupiter, the Temple of Saturn and the Temple of Concordia.

THE PALACE OF SENATORS – Built between 1200 and 1300, the palace stands on top of the Tabularium, a building that once housed the Roman Empire’s archives. Today, the building is the headquarters of the Rome Municipality. The double flight of stairs on the front has been designed by Michelangelo.

The old Tabularium, which offered a sound foundation for the new building, was used as municipality since 1144, which makes this place the oldest city council in the world. The current building was erected on the Tabularium and the remains of the ancient Temple of Veiove. The Tabularium is actually accessible from the Capitoline Museums. Here, you’ll see an impressive arched structure, inscriptions, statues and remains of marble ornaments and monuments, belonging to the Imperial age.

PALAZZO DEI CONSERVATORI and PALAZZO NUOVO – The two buildings face each other, and have an almost identical structure. They house the Capitoline Museums. Palazzo dei Conservatori was built in 1400 and then completely renovated by Michelangelo and Giacomo della Porta, whilst Palazzo Nuovo was built by Michelangelo from scratch. The two buildings are connected by an underground corridor. 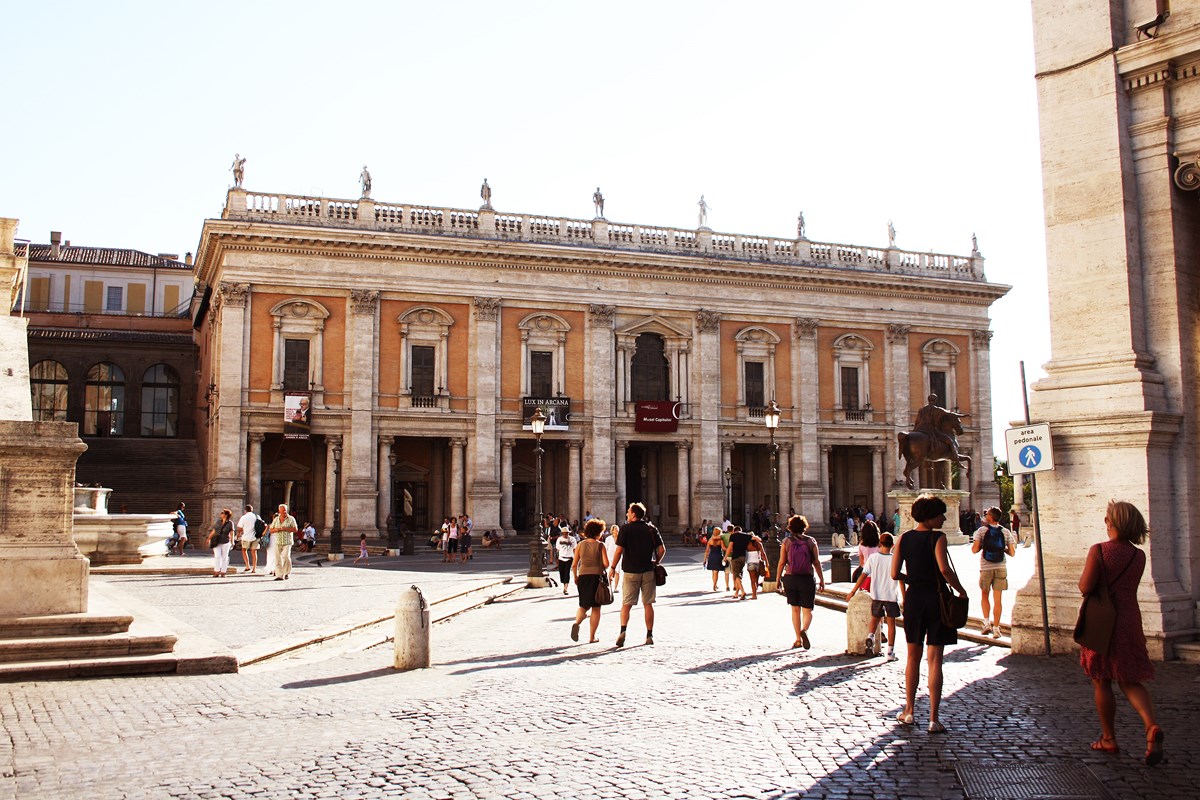 THE STATUE OF THE EMPEROR MARCUS AURELIUS – Known as the emperor-philosopher, Marcus Aurelius was actually forced to spend most of his life conducting victorious war campaigns, mainly against the Gauls. He is one of the last (and main) exponents of the Roman Stoic doctrine. During his long reign (161-180 AD) this bronze statue covered in gold was erected to celebrate him, depicting the emperor both as a commander and a god. His right arm is lifted, as to indicate a sign of clemency, and he’s got no armor, which was probably a way to redeem a sense of prosperity and peace.

The statue is the only Roman equestrian statue that has been preserved completely intact. During the Middle Ages, most bronze statues of the Roman Empire (considered a symbol of Paganism) were destroyed. The statues were actually fused to recycle the bronze. This one was preserved because it was wrongly attributed to Constantine, the first Christian emperor.

At the beginning, the statue was probably placed either in the Forum or in the Colonna Square. It was moved here in 1538 and finally placed in the current position by Michelangelo just a year later. Due to external and some minor structural damage, the statue was moved to one of the halls of the Capitoline Museums. The one you admire in the middle of the square is an exact replica made with laser technology. This massive monument faces the lower Piazza Venezia and offers one of the best views of the city. It was designed by the architect Giuseppe Sacconi and built between 1885 and 1935. The building has the structure of a “modern Forum”, with three levels and a colonnade at the top.

The Vittoriano has a high symbolic significance, as it was originally dedicated to Vittorio Emanuele II, the first King of Italy after the unification of the Peninsula. At the top of the monument, an altar depicting the ancient Rome deity is situated. Here, since 1921, lies the tomb of the Unknown Soldier, as a reminder of the sacrifice of the Italian army during World War I. Each year, on the 2nd of June, Republic Day, there is an official ceremony attended by the President of Italy, who lays a laurel wreath beneath the tomb.

How to Get to the Capitoline Hill

Reaching the Capitoline Hill it’s very easy. You can arrive here by bus using many bus lines, such as line 8, 60, 810, 170 and C3. Some of those lines stop in Venice Square (Piazza Venezia) which is just a few meters away from the Capitoline Hill, others in the near Via del Corso. Alternatively, you can use the subway (Metro Line B) and get off at the stop called Colosseo (near the Colosseum). The Capitoline Hill is just a 10 minutes stroll from here. When you come here, we suggest that you also plan a visit to the Capitoline Museums. 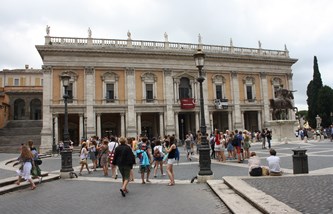 Three buildings compose the Capitoline Museums. These group of museums showcase art and architecture collections from Rome in antiquity and the Renaissance. Read more...... 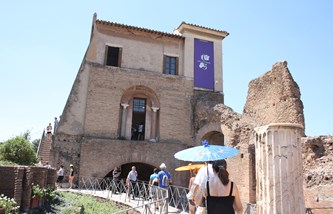 The Palatine Hill is one of the Seven Hills of Rome. Previously, several emperors lived here. Here, you can visit the House of Augustus, the House of Livia, Nero's Cryptoporticus and the Domitian's secret passage. Read more...... 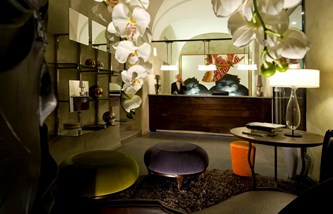 Top Rated Hotels near the Colosseum and the Roman Forum

There are many hotels and holiday residences that you can find at Rome’s center, which are just a quick stroll away from the main spots in Rome. Read more...... 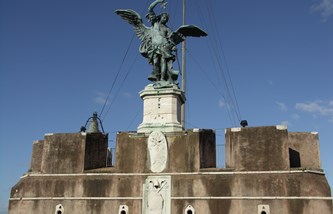 Castel Sant’Angelo also known as Angel's Castle, this is where you can get one of the loveliest views of Rome whether it may be during the day or at night. Read more......