Rome was the center of the ancient world and then a force of power during the Middle Ages and the Renaissance, and its architecture bears witness to all those centuries of glory. While you’ll find plenty of incredible squares in the Italian capital, few are quite as impressive as Piazza Navona. Often dubbed Piazza Navone or Navona Square in the English-speaking world, it is, alongside Piazza di Spagna, one the most famous squares in the Eternal City. If you love Baroque architecture or simply adore spending time in beautiful public spaces, you can’t miss Piazza Navona in Rome!

As Rome is a few thousand years old, it has been witness to a great many eras, and there are actual, physical layers to the Eternal City. Some of the grand landmarks of today are built on the ruins of former spaces. Archeologically, Rome is a little like an onion - and Piazza Navona is no exception! 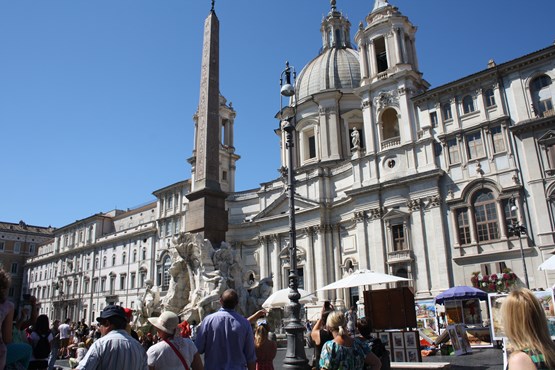 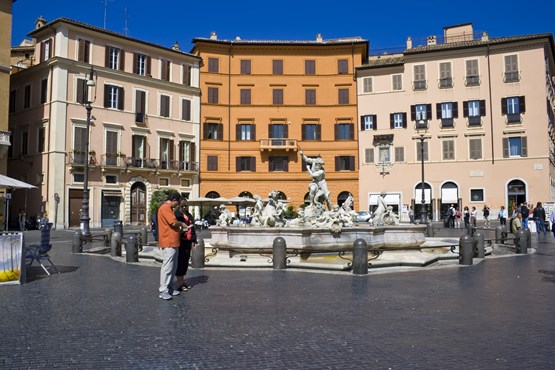 From Circus to Piazza

People who look at maps of Navona Square might find its oval shape resembling a stadium, and that’s because that’s exactly what it was. In Ancient Rome (more precisely during the empire), the space served as a Circus Agonalis, which translates to competition arena. It was commonly known as the Stadium of Domitian, as it was built during Emperor Titus Flavius Domitianus’ reign. It is believed that the current name Navona stems from the ancient Greek word “agones,” games.
In its prime, the stadium could host 30,000 spectators, about half as many as the Colosseum. The shows were almost exclusively athletic contests, games and chariot races, or even gladiator fights during the venue’s later years. The stadium would also host the occasional naval fight, flooding the stage for an impressive sight.
After the Roman Empire fell, the stadium fell into disuse for centuries. As it happened with the remains of many ancient monuments, builders would take stones and pieces from the former circus to build new things. It wasn’t until the 15th century that the city would see splendor coming out of this area once again. That’s when the former stadium was first turned into a square, made to host the city market. Later, in the 17th century, Pope Innocent X commissioned a piazza in the venue, perhaps partly to adorn his family’s palace across the street: Palazzo Pamphilj.

Gian Lorenzo Bernini was one of the most important artists of the 17th century, specifically in Baroque style. He was commissioned to create adornments for Piazza Navone, crafting some of the most famous fountains of Rome. Now, the Piazza Navona is famous among artists and tourists from everywhere in the world. It is very popular, not only because of its picturesque appearance, but also due to other attractions such as the fountains, palaces, churches, cafes and restaurants around it. 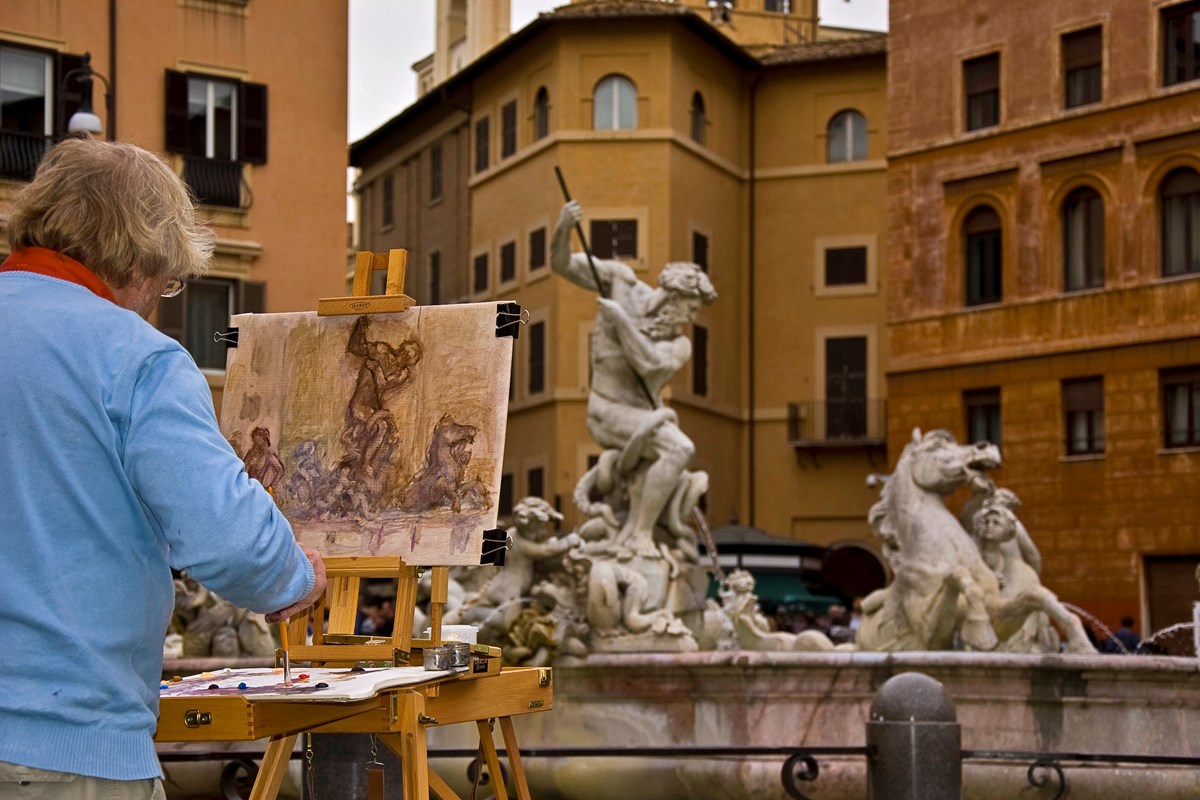 What Will You Find at Piazza Navona in Rome?

Many of the most famous landmarks in this square are fountains, as these structures have been essential in Roman life for millennia. The city of Rome has provided public fountains for centuries, as they were the source of water inside neighborhoods before home plumbing existed.
In times of the Church's great power, Roman fountains were also monuments to reigning Popes, who were among the most powerful figures in Europe and the world. Rome has more fountains than any other city, varying in sizes between the monumental and small. And some of the most famous are right there on Piazza Navona!

Fontana dei Quattro Fiumi or the Fountain of the Four Rivers

The Fontana dei Quattro Fiumi is one of the largest and most famous fountains created by master Bernini, and stands at the center of the piazza. It was designed in 1651 for Pope Innocent X, in honor of both the Pamphilj family and the power of the Pope. Not unlike how major city projects occur now, the fountain’s design was also selected through a competition.
The fountain is named after four major rivers in continents where the papal authority has spread: the Nile (Africa), the Danube (Europe), the Ganges (Asia) and the Río de la Plata (Americas). Atop the representations of the river gods sits an obelisk from Domitian’s time, which was restored and brought back to Rome after centuries on the outskirts of the city.
Each side of the Four Rivers fountain has animals and plants related to the bodies of water and the places where they’re located:
• The Ganges carries an oar as a metaphor for the river’s navigability.
• In the 17th century, the source of the Nile was unknown, so its godly representation has its face covered by a piece of cloth.
• As it’s the closest great river to Rome, the Danube’s head touches Pope Innocent X’s personal coat of arms.
• The Río de la Plata sits on a pile of coins, representing the riches of the Americas.

Located at the southern end of Navona Square, the Fountain of the Moor is almost a full century older than the Fontana dei Quattro Fiumi. It was originally designed in 1575 by Giacomo della Porta, a great sculptor, architect, and apprentice to Michaelangelo. Della Porta was involved in many of Rome’s greatest Renaissance works, including Saint Peter’s Basilica.
The original design of the Moor Fountain only had a dolphin and four tritons, Roman gods of the seas. Nearly a century later, Bernini added the statue of the Moor. Now, the fountain represents an African man standing atop a conch shell wrestling with a dolphin, surrounded by the tritons, on a basin of rose-colored marble. 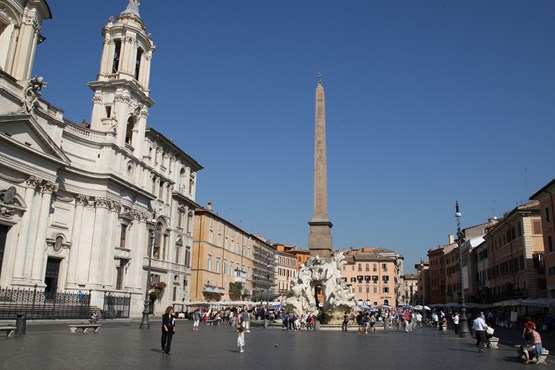 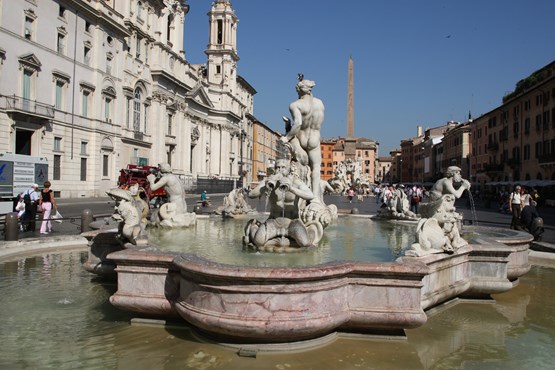 Fontana del Nettuno or the Fountain of Neptune

On the northern end of Piazza Navona Rome stands the Fountain of Neptune, another Renaissance work by della Porta, from 1570. It was made at the request of Pope Gregory XIII at a time of pipe work around the area. At around that time, an ancient Roman aqueduct, Aqua Virgo, was restored, and there was a huge effort on supplying water for the Campo Marzio area. This allowed for the creation of several fountains, including this one.

Originally, Giacomo della Porta designed the basin without any sculptures. It remained that way for 300 years. The current statues, depicting Neptune fighting with an octopus, and Nereids with cupids and walruses weren't added until 1873, in an attempt to balance the grandeur of the Moor Fountain and the Four Rivers Fountain. The artists who crafted the 19th century additions were Antonio della Bitta and Gregorio Zappalà. 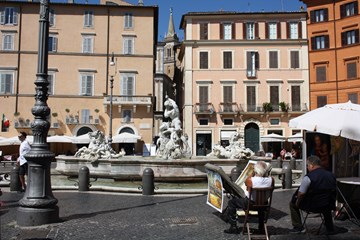 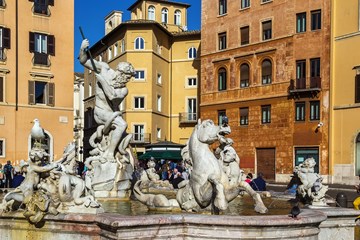 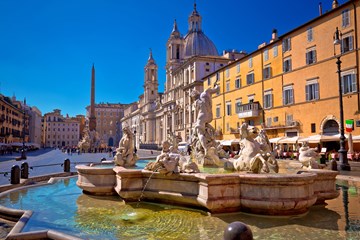 Facing the piazza stands the basilica of Sant'Agnese in Agone, a 17th century example of Baroque architecture. It is adjacent to the Palazzo Pamphili, home to the epoch’s Pope Innocent X. It was originally conceived to be the family’s chapel, so they could attend special services without having to leave their home.
The basilica stands on the site where early Christian Saint Agnes was martyred, during the rule of Emperor Diocletian. You can visit our page completely dedicated to this church at this link.

On the site of the 18th century Palazzo Braschi stands the Museo di Roma. Part of a network of Roman civic museums, it was originally founded to document Rome's vast history and traditions. In the early-to-mid 20th century, the museum housed documents and pieces from Roman past, but its collection has moved in another direction. Nowadays, after decades of donations, the Museo di Roma is primarily an art museum, showcasing works by many Italian and international artists, including Trevi Fountain designer Nicola Salvi. 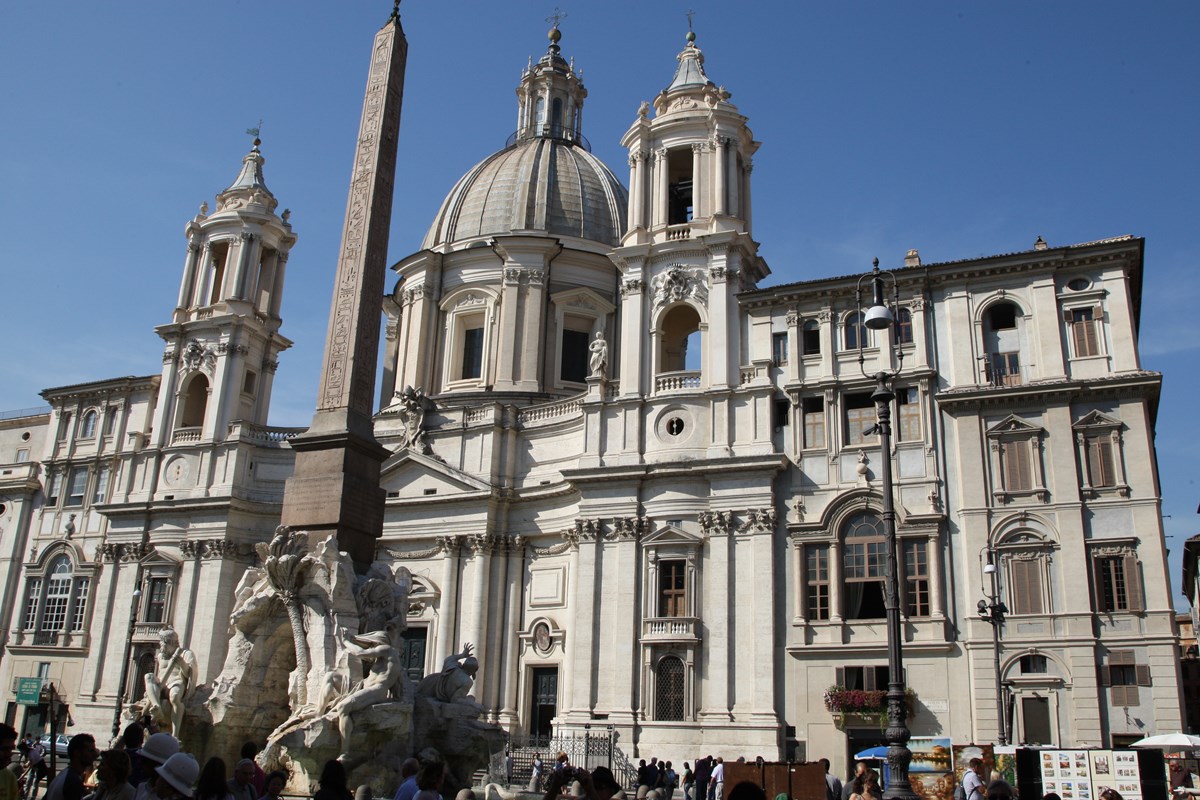 How to Get to Piazza Navona

Below you’ll find the quickest ways to get to Piazza Navona on public transportation:
• Metro. Unfortunately, there are no metro stations terribly near Piazza Navona, and they’d all involve walking for somewhat large stretches. The Spagna station on Line A is the closest at approximately 1.2 km, so you’ll have to walk for about 15 to 20 minutes.
• Bus. The best way to reach Piazza Navona. Some of the buses that will get you the closeby are the no. 87 (which you can take outside the Line B Colosseo station), no. 70 (from Termini, Line A or Line B) and no. 492 (from Piazza Barberini, Line A).

• Address. Piazza Navona, 00186.
• Schedule. This is a public square and visitors can come and go as they please 24 hours a day. It’s surrounded by cafés and restaurants with varying schedules, but they always close late and open early. There’s always stuff going on!
• Piazza Navona tickets. Entrance to the piazza is free.
• Piazza Navona underground. If you wish to visit the ruins of the Stadium of Domitian, the area is not open at all times.
• Full price of the ticket is €8.50, with reduced fares depending on age groups as low as €4.50, including audio guide.
• The stadium ruins open every day from 10:00 am to 7:00 pm, and from 10:00 am to 8:00 pm on Saturdays. There’s no need to book in advance.

Who built Piazza Navona?
In Ancient Rome, the site was a stadium built during Emperor Domitian’s rule. Nowadays, Piazza Navona is best known as a location for Baroque architecture, like Gian Lorenzo Bernini’s famous Fontana dei Quattro Fiumi (Fountain of the Four Rivers).

What was Piazza Navona used for?
Over the course of the centuries, the site has been a stadium, the city market and now a common meeting place for Romans and tourists. 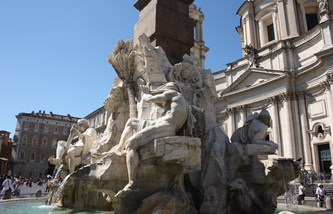 The Fountain of the Four Rivers 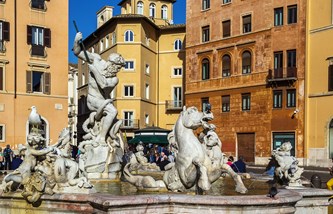 Neptune Fountain, previously known as Fontana del Nettuno, is one of the three fountains found at Piazza Navona. The fountain was specially made in commemoration the newly appointed Pope Pious IV. Read more...... 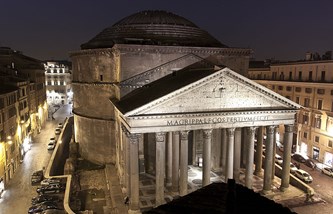 Top 5 Hotels near Piazza Navona and the Pantheon

With the beautiful yet budget-friendly hotels around the areas of Piazza Navona and the Pantheon, surely, you will have the perfect Rome getaway. Read more......