The Papal Basilica of Saint Peter in the Vatican, officially known in Italian as Basilica Papale di San Pietro in Vaticano and commonly known as Saint Peter’s Basilica, is a Late Renaissance church located within Vatican City. The basilica is not only the main church, but also the first of the seven pilgrimage churches, in Rome.

In the first century AD, the site of St. Peter’s Basilica hosted the Circus of Nero and a cemetery. According to earliest history, St. Peter was put to death in the Circus and his remains were buried just outside. Many people remembered and visited his grave considering that he is one of the most important figures in the Roman Catholic Church. In the year 324, this prompted Emperor Constantine to begin the construction on a great basilica over the tomb. The shrine of St. Peter is still the central focus of the church today. 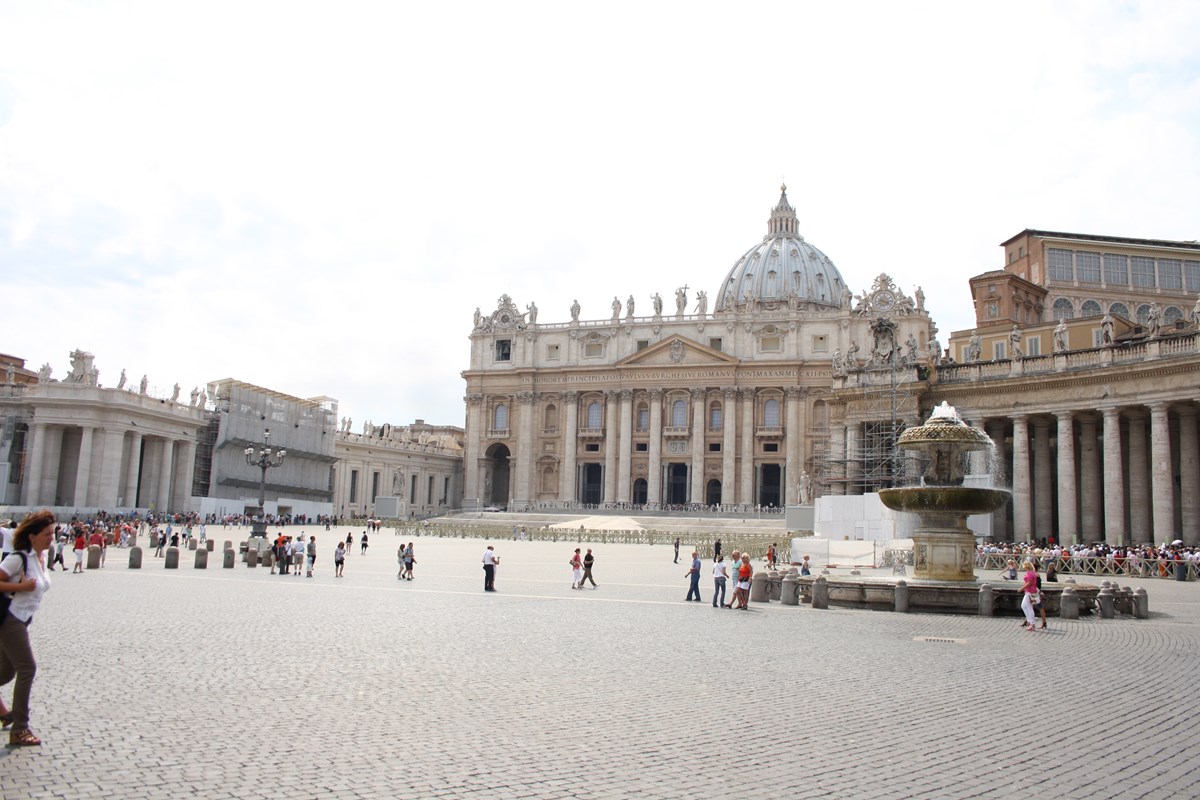 After 1100 years, the original St. Peter’s church was neglected and already in poor condition. There were several attempts to restore it but to no avail. In 1506, it was decided that the old basilica could no longer be saved. It was demolished to make way for a new St. Peter’s Basilica.The construction of the new St. Peter’s Basilica began on that same year with the chosen design of Donato Bramante. Bramante did not go yet beyond the four central pillars and arches of the cathedral and he died. Raphael took over his place. He had other ideas of the church and decided to work on his plans.

After Raphael, Antonio del Sangallo took care of the construction of the church. Even though he followed Raphael’s design, he wanted to take part on its edifice and he decided to break the church down and rebuild it.

Then came Michaelangelo who brought the church back to its original design made by Bramante. Finally, Carlo Maderno built the St. peter’s Basilica further. He spread it out, so the basilica was bigger than its original design. Rich decorations covered the basilica and Gian Lorenzo Bernini made most of them. In 1626, the structure was completed. 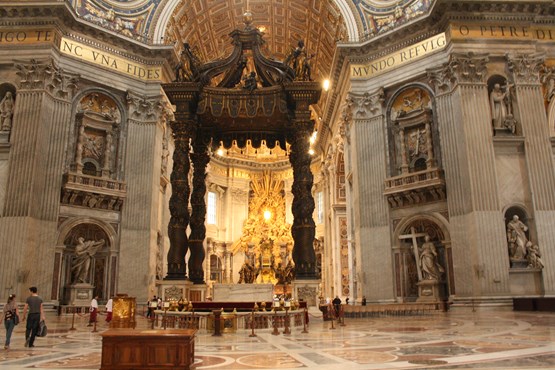 Opposite the bronze gateway is a remnant of the 13th century mosaic la Navi Celli of Giotto. In the pre frontal are five bronze doors. The left door, also called the door of death, displays the image of Christ, St. Peter and Pope John XXIII. Giacomo Manzù made the door. Its name derives from its traditional use as the exit for funeral processions as well as its subject matter. The right door, also called the holy door, which is by tradition only opened for great celebrations such as Jubilee years. The door is completely bricked on the inside. The last time it was opened was when Pope John Paul II died in 2005. 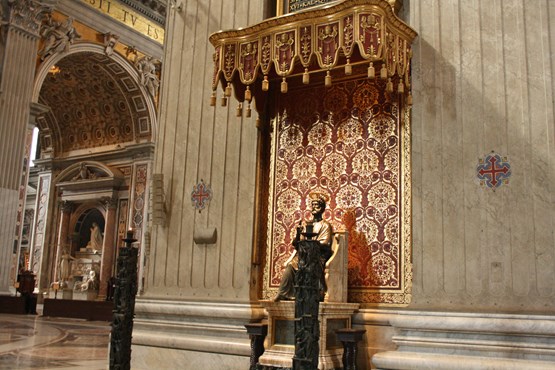 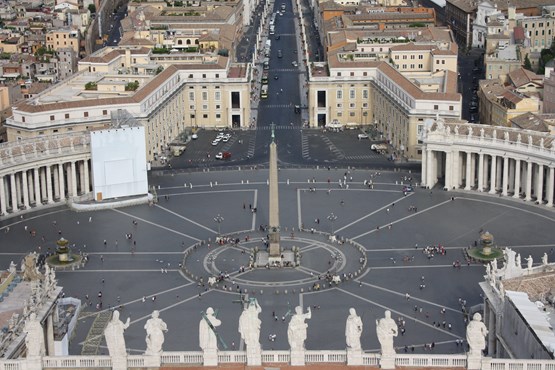 At the entrance, you will find on each side two bins with cherubs. These containers are filled with holy water. At the right side, you come to see the statue of La Pietà that represents Mary with her arms around the dying Jesus Christ. Michaelangelo created La Pietà .

If you are in the middle vessel, you will see on the floor a bronze medal. These symbolize the size of other Catholic churches. In this way, only you can see how great St. Peter’s Basilica is. 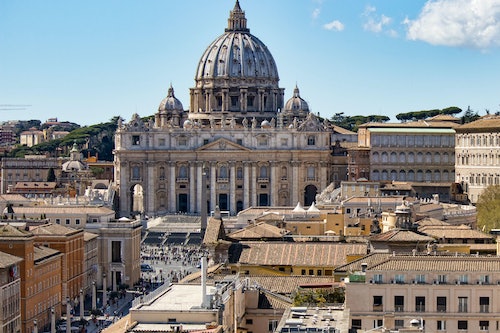 The ticket includes a guided tour - with priority entrance - to the St. Peter’s Basilica and the Necropolis, where the remains of the saint can be found. An official Vatican guide will tell you many interesting commentaries and stories about the church and the art masterpieces by Michelangelo, Bernini and Raphael, kept between these majestic walls. Then, you will descend 10 meters under the ground to see the Necropolis, discovering many relics of early Christianity. 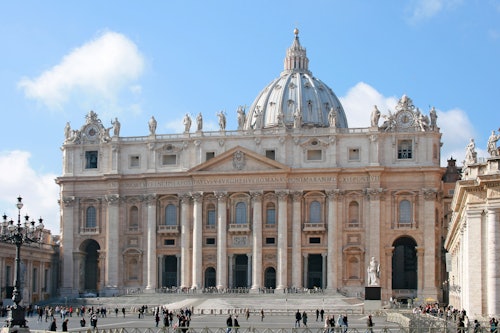 This ticket gives you the opportunity to visit the St. Peter’s Basilica skipping the long lines at the entrance. Plus, you’ll get access to the dome and a dedicated audio guide including earphones. You can visit the church at your own pace and enjoy the beautiful works of art. Then, you can take the elevator that will take you to the first level of the basilica, avoiding to climb the first 171 steps to get to the top of the dome and enjoy the stunning views of the city. 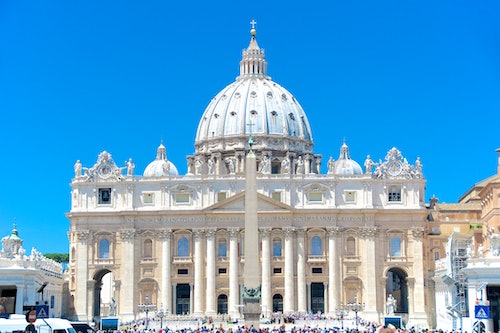 Join a guide to learn everything about the majestic St. Peter’s Basilica. A visit to this sacred landmark is also a fully immersive experience to discover the secrets and wonders of Renaissance art. Here you’ll not also find outstanding architecture, but unique art masterpieces. You can witness the art and inspiration of Michelangelo, Donato Bramante, Gian Lorenzo Bernini and many more. Your guide will be wearing a blue jacket with the Vox Mundi logo. The tour lasts about 1 hour.

At the crossing of the transepts is the fundamental focus of the interior, the baldacchino. It is assumed as the resting place of St. Peter. This colossal canopy shelters the papal altar and the sacred relics of St. Peter. Artistically, it also serves to fill the vertical space under Michelangelo’s great dome. At the right portion of the Bernini’s canopy is a staircase. This leads to the crypt under the church which is the cemetery for many popes.

Four huge columns hold up the dome, which has pictures of saints that stand on the pedestal of each column. These images are also on the bronze statue of St. Peter. Those who take pilgrimage in the St. Peter’s Basilica should follow the custom of kissing the apostle’s feet. 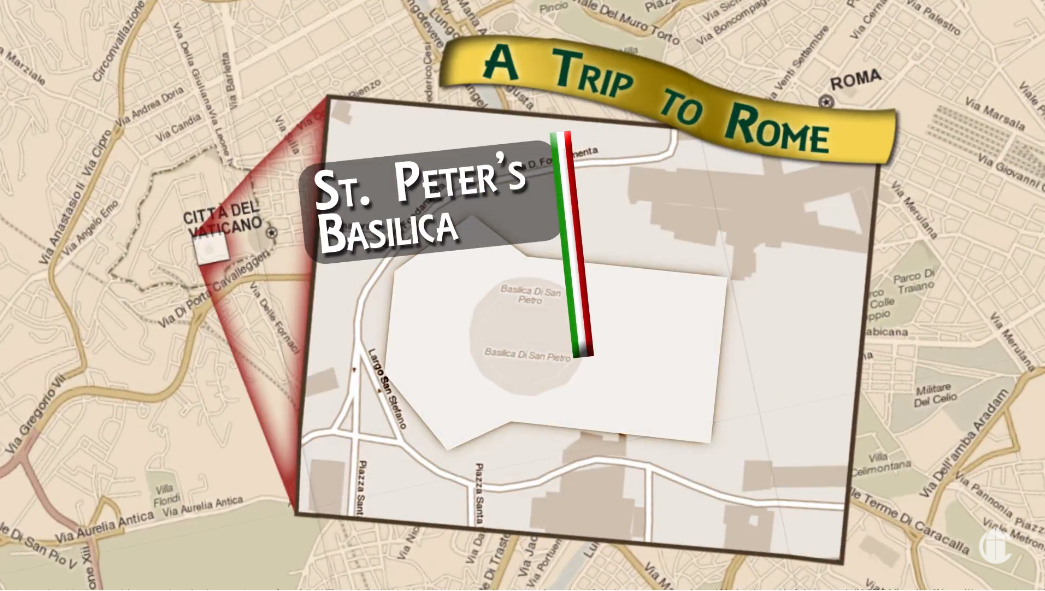 Bernini designed the splendid gilt-bronze Cattedra di San Pietro (throne of St. Peter) in the apse above the main altar. The legs of the throne are decorated with finely pierced ivory bands made in the School at Tours.

At the left side of the transept, the tomb of Alexander VII can be found at the horizontal part of the church that crosses the nave at the canopy. Above its door was Bernini’s last work, a skeleton holding an hourglass. With this painting, Bernini wanted to express how death will come to all of us.

Can you visit the dome of st Peters Basilica?
You can visit the dome. This does cost entrance. Keep in mind that it is quite a climb and the stairs are narrow and steep

Is there a dress code for St. Peter's Basilica?
yes, there is a dress codes. No bare shoulders, no skirts / trousers above the knee and no caps. You can possibly cover your shoulders with a shawl.

How do I get to St. Peter's Basilica?
You take metro line A and get off at the Ottaviano stop. From here it is about a ten minute walk There are several excursions you can book apart from the Vatican Museum. St. Peter’s Basilica and other basilicas accept visitors and tourists. Read more...... Top 5 Hotels near the Vatican Museums, Vatican city and Trionfale

Staying in a hotel near the papal residence provides you with a breathtaking panorama of the holy city and an ambiance of sanctity. Read more......

This monument was built in honor of Victor Emmanuel II. The massive structure attract attention from almost all parts of Rome because its white marble stand out Read more......